Ian had previously worked in office and retail environments before moving into insurance as a supervisor where he worked for six years. When the office closed down, Ian started college to retrain. However, before leaving work he had started to suffer from severe insomnia, depression and anxiety which caused him to leave college 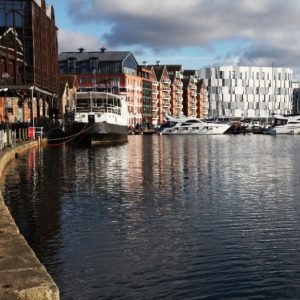 and resulted in him being unemployed for 13 years. During this time, he completed some temporary work when he was able to. As Ian’s mental health improved he looked for full-time work but lacked confidence as he had been out of permanent employment for so long. Due to his anxiety, Ian had isolated himself from other people, so the thought of being in a workplace with lots of people seemed a massive hurdle.

Seeing a poster for the Returneeship in Ipswich Jobcentre Plus, Ian decided to sign up as he wanted to improve his confidence and to feel comfortable being around people again. He met with a Release Potential staff member who explained that if he felt nervous while on the course to come and have a chat rather than leave which meant Ian felt prepared.

On the first day, seeing the equipment, Ian did feel nervous and scared but knowing that these feelings were normal and that he could speak to staff if he needed to, meant that he stayed to work as a researcher. This enabled him to use IT skills to research the local area which interested him immensely. Ian thought that the two-day project was a great icebreaker and mixing with people at his own pace meant he felt able to spend more time with them in the classroom. After refreshing and adding to many of his skills, Ian realised that he knew more than he thought, and this helped with his confidence.

Just as Ian finished the Returneeship an agency called offering him a temporary position in customer service with a local company. Ian admits he might not have been able to handle the thought of it previously. As the Returneeship had boosted his self-esteem and shown that he was able to be around people again, he accepted the role. Ian has been working full-time for the last two months for a large mail order plant and seed company. While it is a temporary contract, he is feeling optimistic for the future and is busy studying for a level 3 in business administration and learning Japanese (Konnichiwa Ian!). Ian’s advice for anyone thinking of the Returneeship “The way the course is run is really good, the teaching style was different to what I had experienced on other courses. There was lots of opportunity for discussion and to understand other people’s perspectives and we were not talked at. I got up and went to the course each day, not because I had to but because it was interesting. The tutors and support staff were very approachable, and it was a positive environment, which was important. I would definitely recommend the Returneeship.”