Rising to her potential

After gaining many years’ experience in factories and retail, Kerrie and her husband decided to work for themselves by running a pub together. Everything had been going well when ten months into taking over the pub, her husband suddenly collapsed. This resulted in her husband needing full-time care, which Kerrie dedicated herself to until his death a couple of years later.

Following his death, Kerrie decided to get back into employment and she went to Grimsby Jobcentre Plus for help. Hearing about the Returneesh 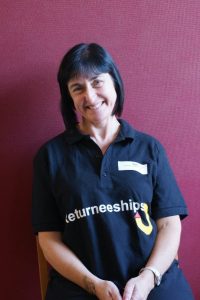 ip, Kerrie registered for the course by calling Release Potential, with the aim of gaining confidence, some qualifications and after becoming isolated, to start mixing with other people again. By the time of the Returneeship, Kerrie had been unemployed for a total of three years.

While she describes herself as a ‘nervous wreck’ on arrival, Kerrie started talking to people straight away, starting friendships in the process. Opting for the editing but with few IT skills, Kerrie worried about learning new software. However, with a professional editor as a mentor, by the second day she felt far more confident and completed the task with ease.

In the classroom she gained qualifications in IT and customer service. While working on a business plan, Kerrie found herself organising the group in a task. She had never done this before and through this she realised that she had leadership skills. During the course, Kerrie applied for a temporary contract at Boots and was successful in getting an interview.

Release Potential staff helped Kerrie to prepare through a mock interview. The positive feedback Kerrie received gave her further confidence in the actual interview and she was offered the job.

On completion of the Returneeship and after finishing the temporary contract, Kerrie applied for a permanent part-time position at Greggs. Kerrie attended the interview, her talent shone through and she got the job of senior team member. She is delighted with the company and the rest of the team she works with.

Kerrie plans to take on any training offered and would like to work her way up within the company. With a bright future ahead, Kerrie says “The Returneeship was brilliant and the Release Potential tutors were fantastic, it was a lot of fun and work but I gained so much confidence. I feel optimistic about the future again.”